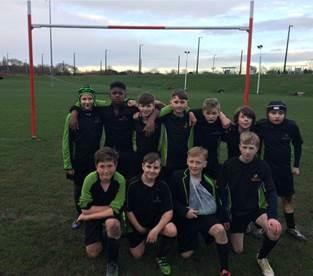 The year 7 football team reached the City semi-finals last Thursday against a very strong Nottingham Academy, including several academy players, the students narrowly lost 2 – 1. Conceding in the second half of injury time. I was so proud of all students, their attitude and determination was exceptional. Despite the tears at full time, they still managed to smile for the photo. Please congratulate all students involved.

I also took the Year 7 Rugby team to the Nottingham city competition last night. NUSA won every game they played in last night. With numerous students being scouted as a result from their performance. Dayton Lancaster was the star of the show scoring 6 trys